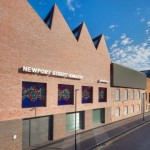 The system is a high performance seamless bonded membrane, which is extremely robust.

Damien Hirst opened his Newport Street Studio in Lambeth in London in 2015. It was developed over a period of three years and it was Damien Hirst’s long term ambition to build a museum to share his collection with the public. His love of curating, which dates back to the beginning of his artistic career and the organisation of group shows such as ‘Freeze’ (1988) and ‘Modern Medicine’ (1990).
The exhibitions presented at Newport Street vary between single artist and group shows, Free entry for all exhibitions: Tuesday – Sunday 10am – 6pm.

MacLennan were contracted by Walter Lilly to work with them and the architect to provide a robust seamless waterproofing pitched roof system that could be applied over convoluted shapes on timber.

The roof was to be waterproofed then have reflective rain screens fitted on hundreds of brackets which had to be incorporated within the waterproofing.

The system proposed by the architect was MacLennan Polyprufe Waterproofing Pitched Roof system. All stake holders required that the system was tested before application as the contents of the gallery are very valuable.

Polyprufe was applied and thoroughly tested with water and loads and movement. The system was proven and accredited by Vinci as suitable.
The client paid the MacLennanuk team to spray a mock up roof which was then tested for all potential movement and weather conditions.

The Maclennan team were then engaged to carry out the installation which included encapsulating hundreds of metal fittings which were to be used to hang rain guards.

The surface of the roof was thoroughly and expertly prepared by our qualified technicians, joints were taped with a heat tolerant de-bonding tape and the surface of the plywood was sealed with our Polyprufe Primer.

Once that was done Maclennan technicians were able to spray the roof with Maclennan POLYPRUFE Waterproofing Pitched Roof system. The Polyprufe coating was seamless, fully bonded, impact and abrasion resistant and best of all dry in seconds.

By using MacLennan as the waterproofing specialist for the project, the client ensured a watertight roof. We also provide insurance backed guarantees for our work, which gave the client long term peace of mind. A seamless, Watertight covering even round the fiddly bits!
The work was very time sensitive and MacLennanuk agreed to a very tight programme, and delivered the project on time.